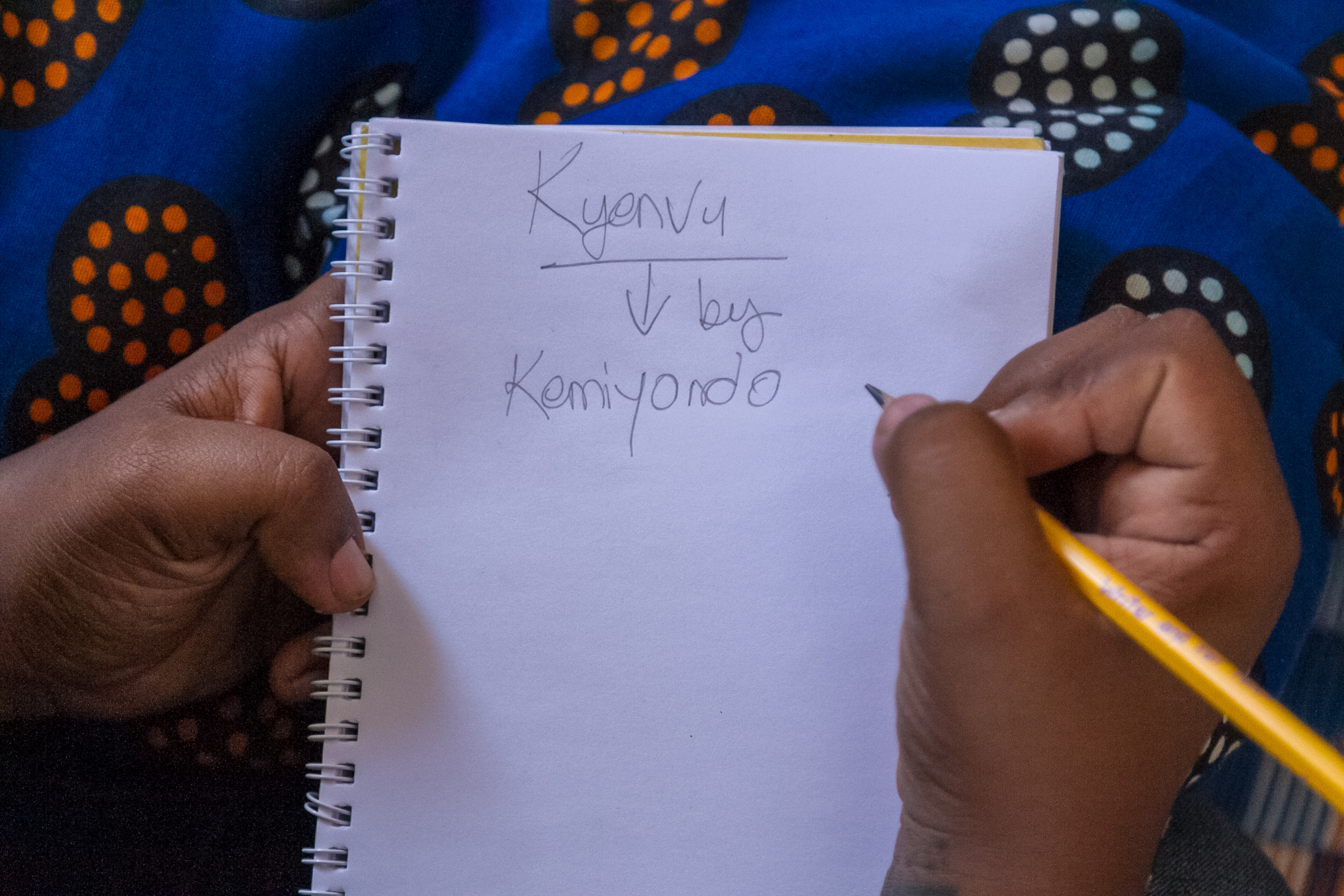 After watching Kemiyondo Coutinho’s Kyenvu, an in-depth discussion was inevitable. This is Part 2 of our chat. Read Part 1 here.

Let’s talk relatability then. How real was the main theme of rape and female objectification for you?

Nyana: One of the things Max (who I sat next to) said after, in reference to the rape scene was it’s not unimaginable, it’s not something that seems far-fetched. I felt that level of relatability through the entire film. In the taxi, preparing for a date, walking to a taxi stage and you’re very uncomfortable because of the boda boda guys, it was such a relatable film!

Esi: It was real! That very evening, after watching the film, I left at about 9:30pm. I got off my boda at the trading centre close to home because I wanted airtime. So I’m walking home after and I have to pass these boda guys and their friends, gathered at the roadside bar, drinking and laughing. I look down and walk by really fast, and as I approach home I am shook by how identical that situation was to the one Kemi’s character found herself in. These are things that happen on a daily! I’m forced to feel uncomfortable for no other reason other than that I am a woman.

Dushiime: Uh huh! About AIDS, about rape, about getting pregnant. Can’t there just be a story in Africa that’s just a story? When I saw the Kyenvu promotion, I thought it was a love story and I was like finally! A story that’s happy.

Nyana: There’s happiness in it, but there’s also a message she wants to put across. There’s a line she says in the film, ‘A wardrobe choice changed my life.’

Esi: She went through several outfits and had even walked out in pants! Then she came back to the mirror and remembered her cute yellow skirt and decided to wear that.

Nyana: And that decision changed her life!

Dushiime: Was that to suggest that if she had worn pants it would not have happened?

Esi: I think she was bringing across the point that men will feel more entitled to your body depending on what you’re wearing.

Nyana: …and also, while she was being raped, the guy said she asked for it; ‘When you dress like a malaya, this is what happens.’ 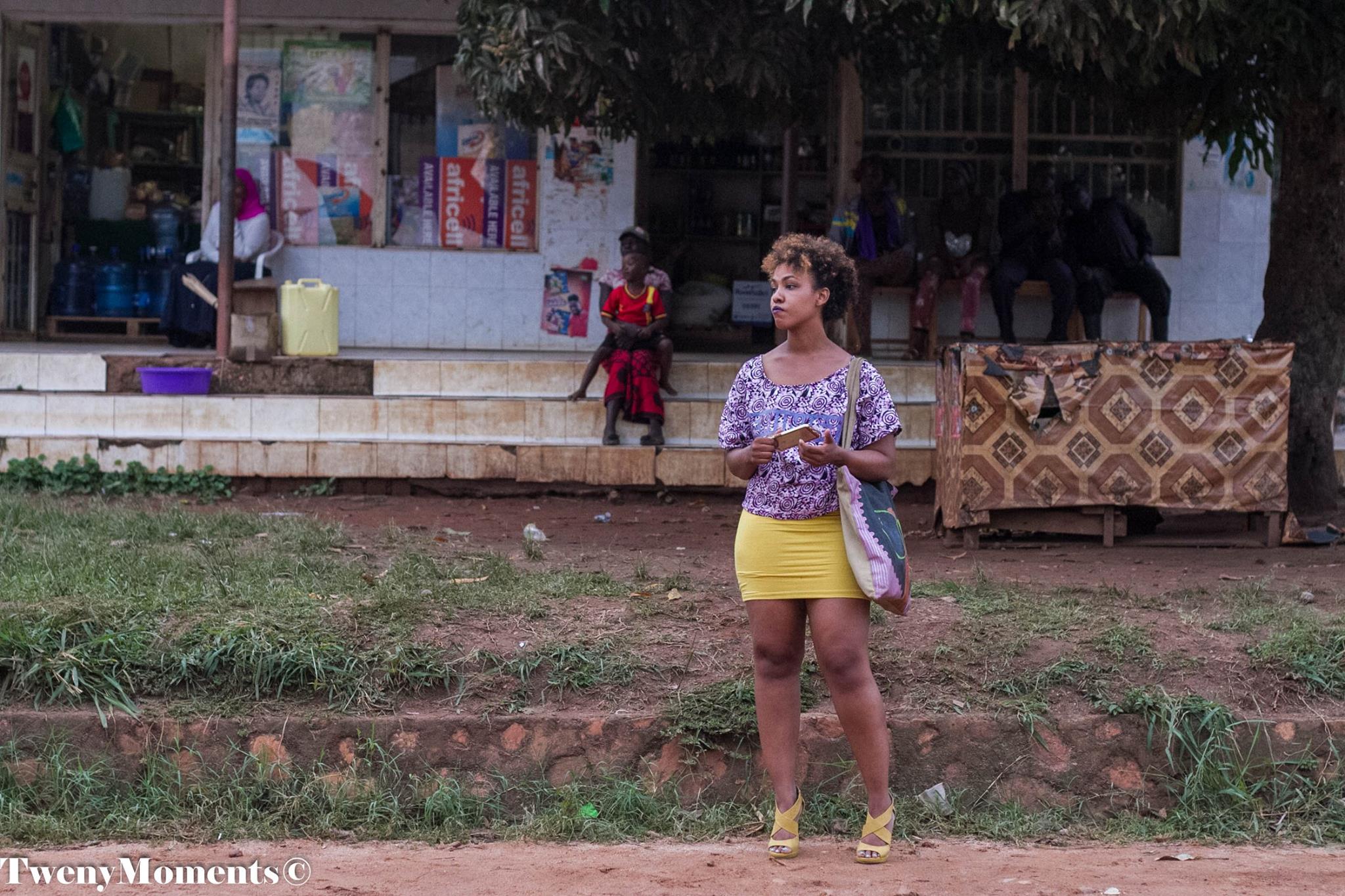 Dushiime: And what about places like Saudi Arabia, where women who are COMPLETELY COVERED UP still get raped?

I remember when the court case involving UCU was happening and my mum said, ‘When you tell a girl not to enter school because her skirt is short and she will distract boys, it means that his education is more important than her’s’. Because as a girl that has to go home and change, I’m missing a lesson. That used to happen in UCU because when you’re 15 minutes late for a lecture, you don’t walk in.

Esi: But don’t you think that there’s a difference between that rule imposed ‘so as not to distract boys’ and the rule imposed for religious purposes? I would understand if UCU implemented the rule because they are a Christian university. That I can’t fault them for.

Dushiime: You see, if the rule was no short skirts, that would be fine. But the rule says, no provocative skirts. What does that mean? What exactly is a provocative skirt? And why is a man the one at the entrance telling me to go back? Why are they being given the opportunity to stare at women in that way, being the one’s to decide if my skirt is ‘provocative’? Why allow him the opportunity to pick me apart in public? And that was one of the biggest issues. At least put female guards, and have them be the one’s to inspect.

Nyana: Men are treated like animals. Like they can’t control themselves. Why aren’t they telling the men to have self-control? Because there will be places where someone will wear a short skirt, a long skirt, whatever length. They should be able to exist in all spaces without this “uncontrollable” urge to rape someone. When I sit in a taxi, my skirt rides up sometimes, as a man seated next to me, will you start losing it? Like you’re crazy? Are you possessed? It’s careless of men to leave their self-control to the hem of a skirt/dress.

Kyenvu depicted the rapists as ‘no good men’. The one’s you would expect to rape in a sense. They were hoodlums. Opinions on this portrayal?

Nyana: I feel like that narrative has tricked us into trusting “good men”.

Dushiime: Thanks for this spoiler because now I know it’s not the guy who vibed her that raped her.

Dushiime: I wish it was imagine? Because of what Nyana has just said.

Nyana: We always think it’s a terrible boda guy who will rape you, the mad man, the village drunkard or maybe an askari. But never your boyfriend, never that cute boy in the bar. That never crosses your mind. I felt that we should have changed that narrative because it has made us trust people we shouldn’t trust. 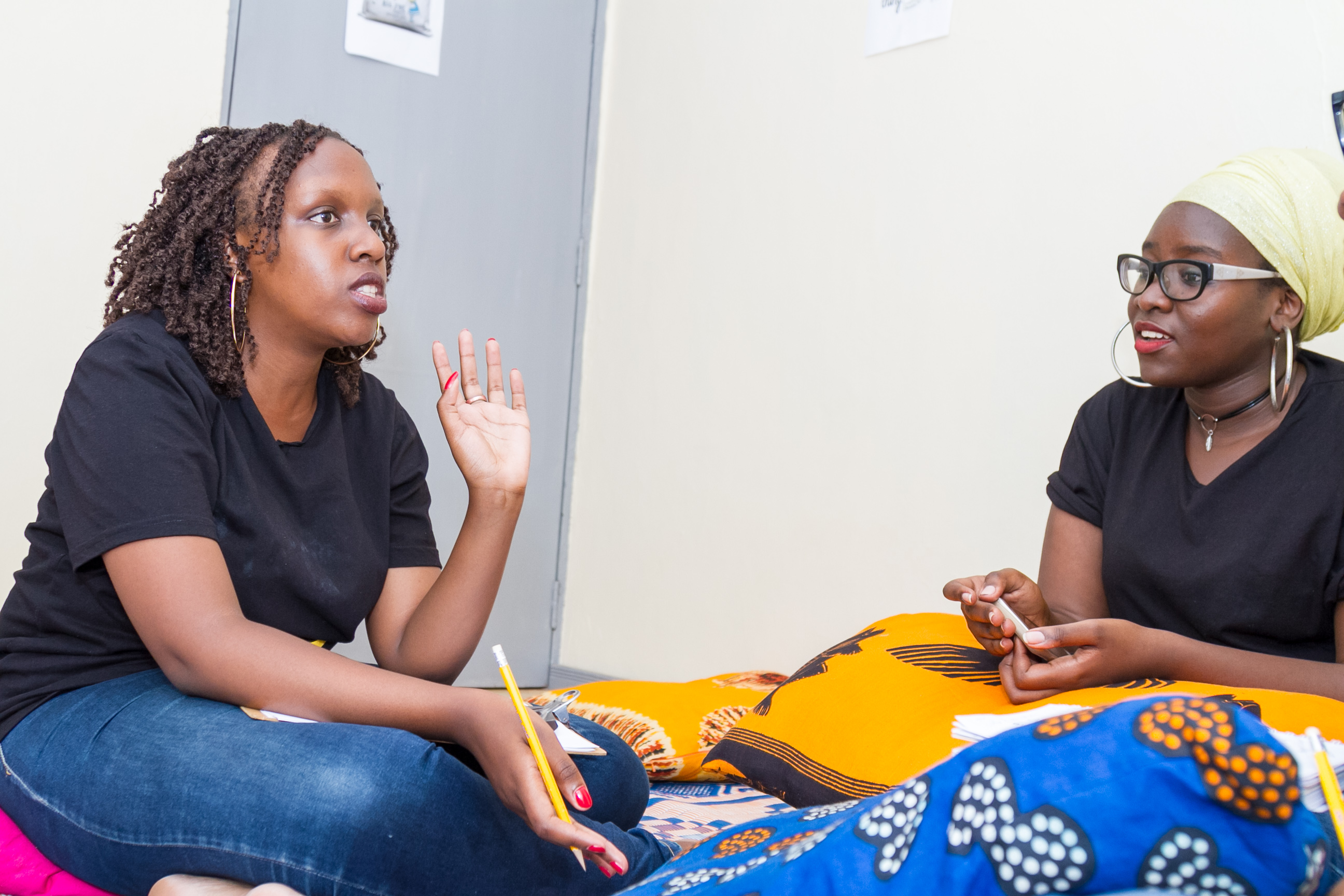 The film overall would be Rated R. The cussing, Kemi’s naked scene at the end… Do you think this film would be something Ugandans would watch and not criticise?

Esi: I think demographic matters. You can’t show it to my mother’s demo for example, and not expect criticism.

Nyana: Well, I think it might be lost but that’s the risk you take, people who get it will get it. The thing is, I feel like as Ugandans we use morality as a way of not talking about things. So you would rather focus on ‘Oh she was naked, she was wearing a short skirt’ instead of talking about the fact that someone was raped.

Dushiime: I think that begs the question, how do you write things that are not PG13 and have Africans/Ugandans appreciate the art and not quickly become righteous.

Nyana: This is where the role of critics comes in I think. Because you direct the conversation. So if critics come up and say it was a good movie until she undressed then the message gets lost. But if people can sit down and talk about the real issues that happened, then the film can be appreciated for it’s message.

Esi: What are our kids seeing nowadays anyway? If we are being realistic. Even us as adults. We’ll be more comfortable watching things like Power, where it’s real sex really, and we’ll talk about Power as a cool series.

Dushiime: Nanti those things are for bazungu. (laughs) It’s “Un-African”.

Esi: And that’s what I’m saying. That façade needs to drop. People need to stop pretending. 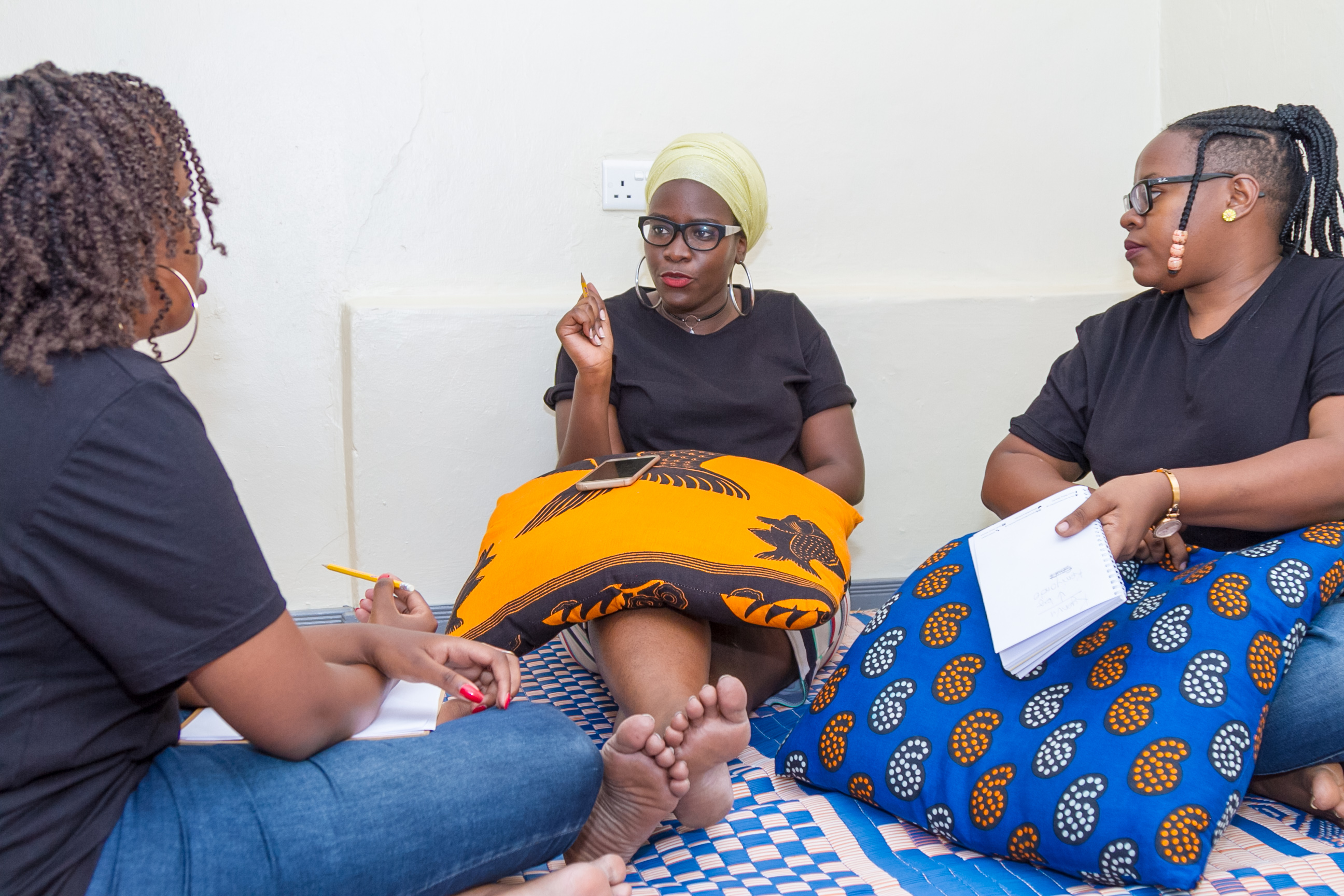 What stayed with you after watching?

Nyana: How she laid herself bare; physically and figuratively. I thought ‘Wow, this person is so committed to her art’. Sometimes people stand in the way of their story. They sanitise it. Think about people who will be watching, and I’m sure she went through that process, because I mean, it’s Uganda. But I really respect her for bringing that rawness. It fed into the story; because when something like that happens to you, you have nothing. They’ve taken one of the most precious things. What’s left to take? So for her to present it like that was perfect.

Dushiime: Wow. I’m thinking of even besides you viewers, how she had the whole production team seeing her this vulnerable.

Nyana: That’s the other thing! The actors too! It also calls for a high level of professionalism. The guy sat with her in the bathroom. If he were trash he’ll be like ‘But I’ve seen you naked before’. It was so multi-faceted for me. She was so honest.

Esi: I talked to my family about the screening omitting the parts I thought would be a lot for them, and my mum said she actually wanted the film, to show to her students (she’s a Sociology lecturer). Like we’ve talked about, I couldn’t help but think though that should she – or any one from her age demographic – watch it, the powerful message of the film will be overridden by the fact that lead character was naked at some point. That is all my mother would see. But I agree with you Nyana. That intensity was powerful. It was realistic. Because rape is not a sanitised experience. It’s raw and vulnerable and she showed us that perfectly.

Nyana: Then there’s a moment just before that when she’s in the bathroom and she’s not talking to the guy, she’s talking to the skirt, “You will be yellow again.” Gosh. I’m tearing up just thinking about it. And then Mo Root’s song at the end. The splattering of blood on the yellow flower just before the credits rolled. It was so powerful.

Dushiime: Gosh, will I survive watching it? I don’t think I want to look like Nyana looks right now. (laughs)

Esi: No but I think it’s important. I feel like sometimes you forget. You get comfortable. And even the recent twitter TL incidents, it shows you how comfortable you get, and you stop expecting danger until you realize how close it is. You stop being aware. Being cautious.

Kyenvu was everything. An absolute must-watch. Thank you, Kemi, it was such an honour to be there. Thank you for inviting us. All the best to you and everyone you worked with!

Check out the official video for Kyenvu’s soundtrack – Yellow Again by Mo Roots – on the Kyenvu Facebook page. 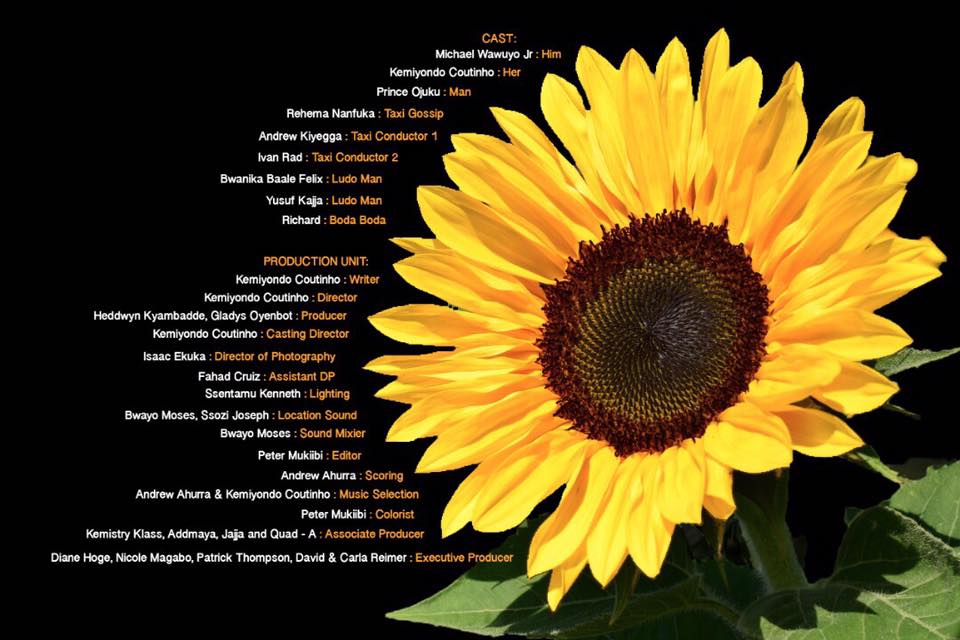